Lane Merrifield vividly recalls the stress his young son felt when he got his first “C” on a report card.

What made it worse was learning later that the teacher had made a mistake.

“His teacher had accidentally switched his grade with another student’s. My son had one of the highest grades in his class,” he said.

This one incident drove Merrifield to launch FreshGrade with the goal of reinventing report cards.

“It’s an archaic system that no one has thought about changing for decades,” said Merrifield.

It essentially creates a private virtual report card for each student, which teachers update throughout the year.

It’s an immediate window into the classroom for parents, who are alerted when anything is added to their child’s digital portfolio and can directly communicate with teachers. It also allows students to view their portfolios and add comments and photos.

The FreshGrade platform rolled into schools in 2014. It’s free for teachers, and there’s a paid version with additional data and analysis for school administrators.

Merrifield said FreshGrade already has half a million student portfolios and is being used by over 20,000 teachers around the world (20% of whom use the paid version).

“When parents ask us how their kids are doing in school, teachers are trained to answer using a letter or number grade,” said Massa. “But a child’s progress is a much more complicated narrative than a single grade on a report card.”

With the digital portfolio, he hopes to have more meaningful conversations with parents.

“At the end of the term, I can pull up each student’s portfolio and go through this body of evidence with the parents,” he said.

Massa acknowledged that it is more work for teachers to maintain digital portfolios versus report cards that are handed out just a few times a year.

“But it’s important work,” he said. “Teaching itself isn’t easy. There’s a growing realization among us that if we’re not fully dedicated to our students, then this isn’t the career path to follow.”

Merrifield’s own mother was a teacher and he recalls the significant amount of paperwork she had to deal with to prepare annual report cards.

“We weren’t allowed on the kitchen table because she would spread out all the paperwork on it,” he said. “[Teachers] shouldn’t be teaching by day and data entry monkeys by night.”

While many teachers are using FreshGrade to supplement traditional report cards, some schools are completely eliminating them.

The Bullis Charter School in Los Altos, California, is one of them. The school is in the process of rolling out FreshGrade portfolios for all of its 740 students in grades K-8, said Wanny Hersey, the superintendent.

To ease the transition, Hersey said teachers have been given laptops and classrooms are getting iPod touches so students can add photos and other elements throughout the year.

Hersey said parents are excited about the change.

“It’s an opportunity for parents to understand throughout the year how their kids are learning,” said Hersey. “We can capture and show them if their child is more confident, is developing leadership skills, or has overcome a specific challenge.” 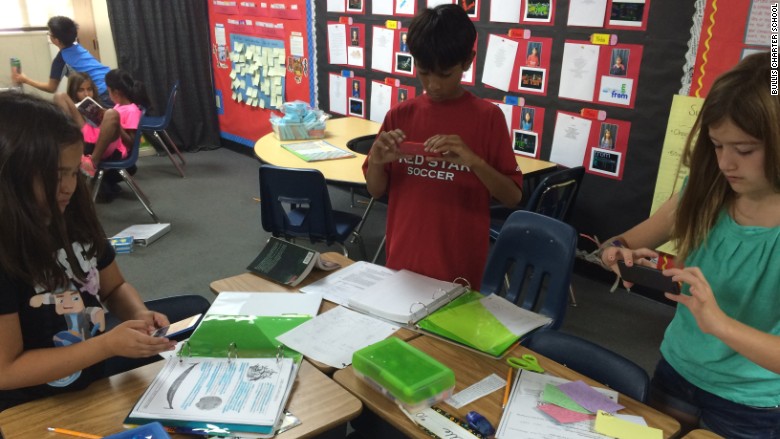 Students at Bullis Charter School using iPod Touches to capture their schoolwork for their digital portfolios.